Having transportation beyond just our legs has helped the growth of society in a variety of ways. With the right mode, we can now move between entire continents in a matter of hours. For that reason, we have seen the massive expansion of communication, trade, and commerce. Our cultures aren’t bound by lines on a map, which we are able to see through the art of kirigami hand-crafted by artisans in Vietnam.

And as we go beyond our boundaries, transportation continues to play a vital role in culture at large. It’s so much more than a system to get us from one place to another. Transportation is even the foundation of entire businesses. Let’s dig into five effective transportation themes that your business can use in a design for a custom 3D pop up card. 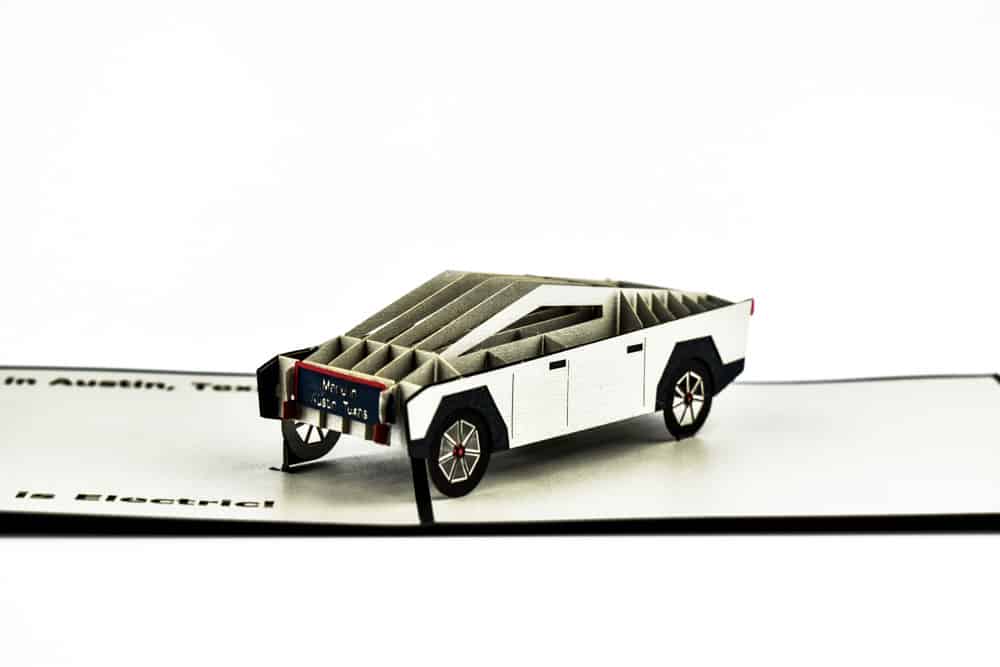 Did you know that the first electric cars date back to the 1800s? In the modern day, more and more drivers are taking advantage of this innovation. We are moving toward a more sustainable future when it comes to day-to-day transportation. If your business is involved in environmentally-conscious practices, it may be the case that you already promote electric vehicles through corporate gifts for employees and clients.

Outside of the good that can be done for Mother Nature, one of the biggest factors that go into purchasing an electric vehicle is cost. Look at how much gas prices have risen. Cars that are fueled on electricity can be charged at a fraction of the cost, potentially even half the price of what it would be to drive the same distance. Because there is an increasing number of public charging stations, it won’t be a stressful experience trying to find somewhere to go for a top-off.

As part of our Austin-themed 3D card collection, we created an electric truck to commemorate the growing industry. It’s even more affordable than the real deal. The future is here, and it comes in the form of a custom 3D pop up card! This design can be used by anyone who is selling electric vehicles, either to thank customers for their purchase or to convince them to take that final step. It could also be provided at tech conferences to other innovators in your industry. 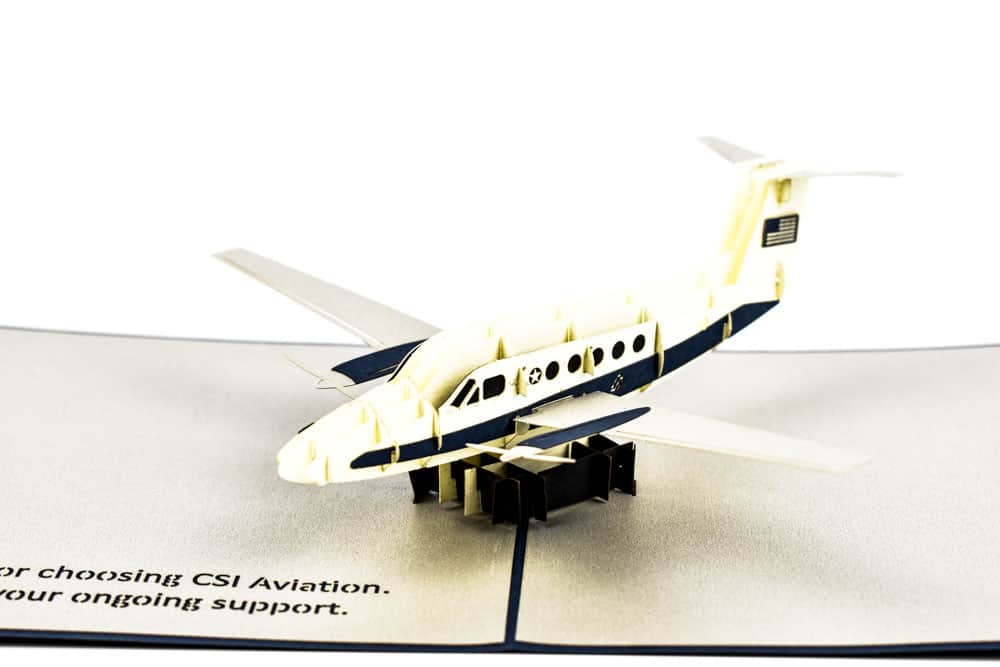 Air transport has drastically altered how we stay connected with others from across the globe. It’s faster and more affordable than it would be to take a cross-country road trip. And it’s certainly a better idea than traveling to another continent entirely by boat. Even with the potential for layovers, depending on where and when you are leaving home, you can’t compete with the lack of obstacles that you face from the sky.

Compared to road journeys, airplanes are one of the safest forms of transport. It’s much less likely to have an accident in a place than it is in a car. In fact, there are planes that are dedicated to providing safer transport for those in medical emergency situations. Regardless of the distance that needs to be covered, those pilots are committed to getting ailing passengers to the hospital quickly. They are especially advantageous for those with trauma injuries.

Awesome 3D Cards created a Beechcraft plane model on behalf of CSI Aviation. This pop up plane is an exact replica, making it a fascinating and unique experience for everyone who receives it. These are given away to hospitals that work with the company, in particular. Even before you open the card, when you see the front page that boasts an illustration of the plane, you know exactly what it is about. Still, there is an element of surprise that comes with the 3D element of the custom 3D pop up card. 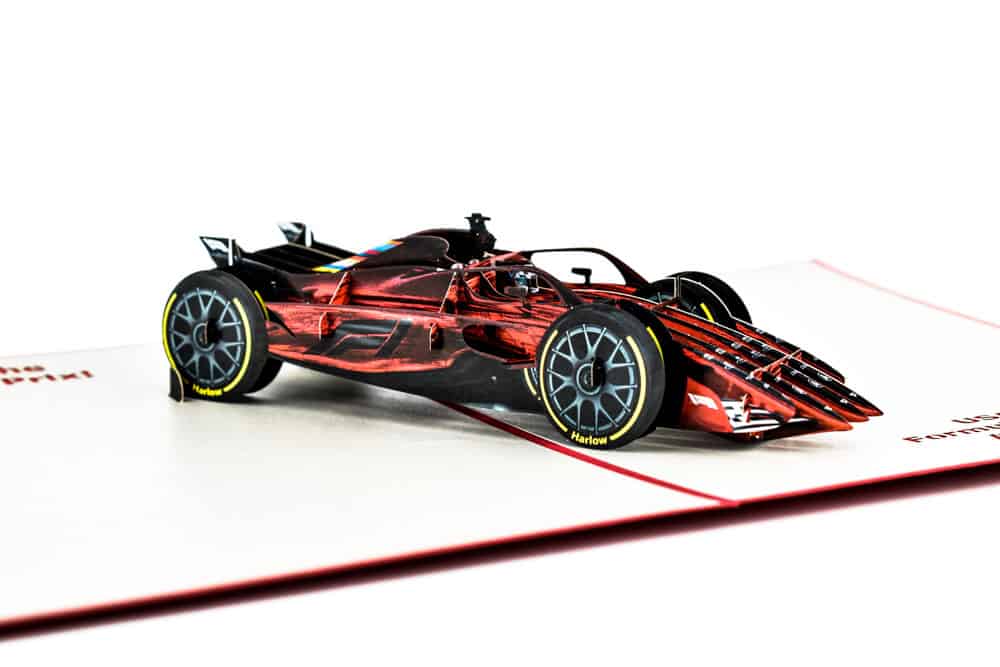 Austin, Texas is the proud home to Circuit of the Americas (COTA), which has dubbed itself as the ultimate destination for racing and entertainment. For the past decade, Formula 1 drivers have come into town from several other countries to participate. This is the highest class of international racing. The Austin360 Amphitheater that is located within the track has also hosted some of the biggest names in music, spanning from Willie Nelson to Kanye West.

People love high-speed entertainment, and professional racers love participating in it. There is a sense of adrenaline that comes with the sport that makes you feel alive. This should be the feeling that you capture if you are advertising a racing event. Speak directly to the hearts of the fans when you develop innovative promotional items. Give them something to make the experience that much more memorable so that they are inspired to return to the next event.

With our Race Car F1-inspired custom 3D pop up card, you can impress anyone who is a fan of racing. As a larger-than-life industry, it deserves a card that stands up. Use this design to showcase a landmark that has become a big part of Austin’s culture. This eight-color model is eye-catching and exciting. Although this is a Ready-2-Go card, you are welcome to personalize the race car as you see fit. As one of our guiding values, Awesome 3D Cards encourages creativity, so we want to provide your audience with the most meaningful Formula 1-themed promotional product. 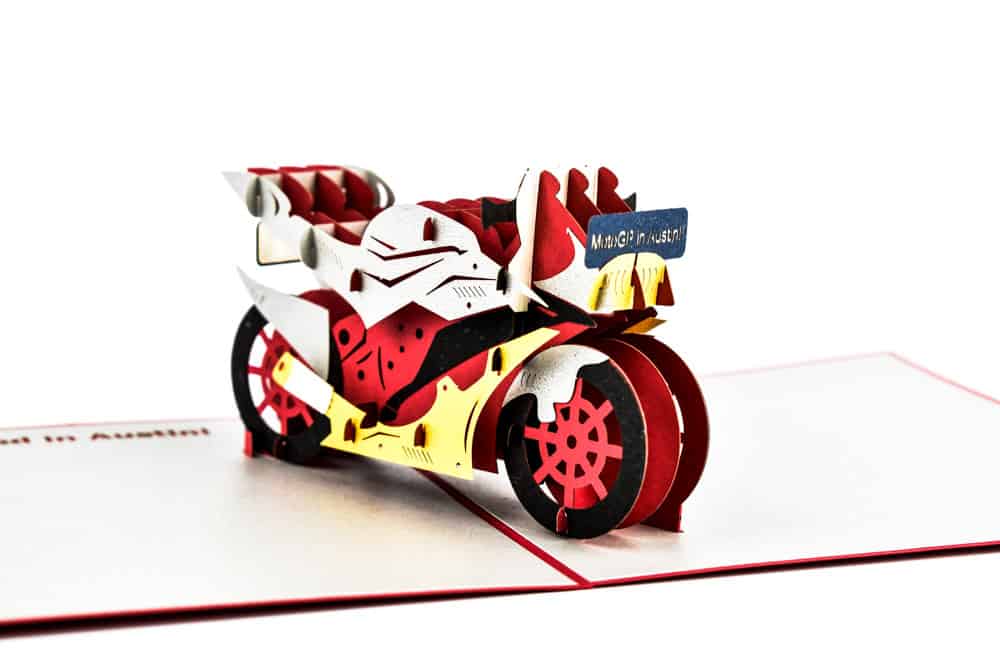 If you want a fuel-efficient method of transportation that provides you with a greater sense of freedom on the road, motorcycles may be the right fit for you. There is an entire community devoted to them because of the mutual respect for the ride. Those that ride and or sell motorcycles recognize that it goes beyond being just a hobby. It’s an entire culture. But motorcycles aren’t just for people to get from one place to the next. They are also great for racing.

Motorcycle racing has been a sport for nearly 130 years. Having started in France, it is now participated in all over the world. As the oldest motorsport World Championship, MotoGP is the current name for the premiere form of motorcycle road racing. COTA is one of the tracks that host these amazing riders and their custom-built modes of transportation.

Celebrate Grand Prix motorcycle racing with custom 3D pop up cards. Our MotoGP racing motorcycle model is the perfect fit for retail sales, customer appreciation, or recruitment efforts. In order to show the passion, courage, and excitement surrounding the sport, we went with a bright red color, both on the exterior of the card and on the pop up motorcycle. This plays as a nice visual contrast against the more subtle gray. The recipient of this card will be pleased to find what an accurate representation the design is to the real thing. 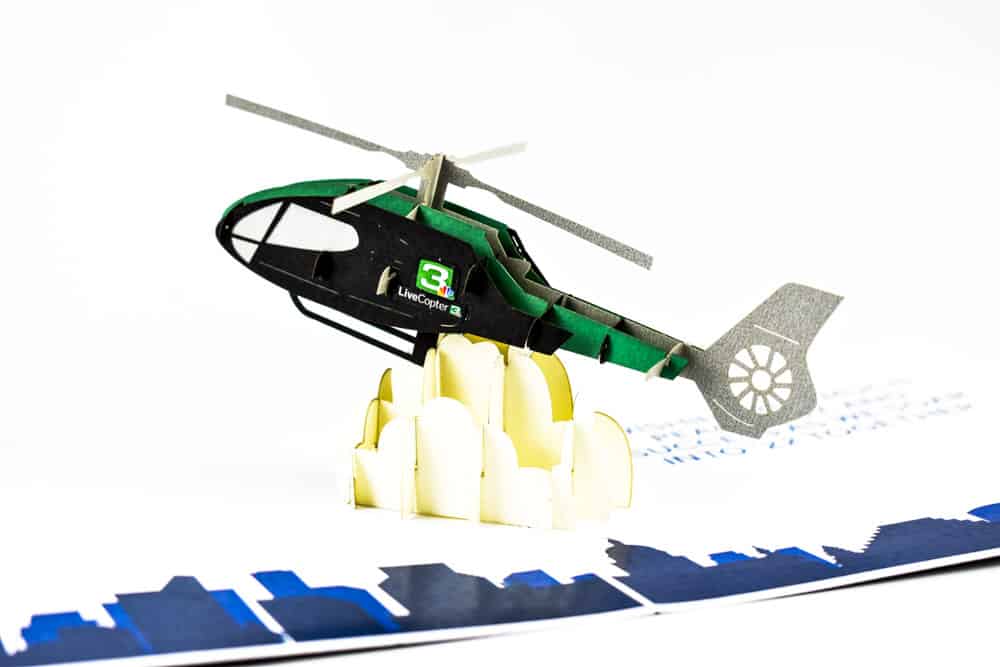 Various scenic locations around the world benefit from travelers wanting to spend their money on helicopter rides. Even the city of Austin has several helicopter tour agencies. If that includes you, consider thanking your passengers with custom 3D pop up cards as customer appreciation gifts. However, helicopters are used for so much more than tourism. They are handled by the military, firefighters, search and rescue teams… Helicopters are even a method of transportation that is utilized by the news in order to gain more interesting footage from a scene.

Certain news stories require aerial coverage. For instance, there could be a car chase or a massive pile-up on a highway. The news gets this information to the public so that they know to steer clear of the area. The fact of the matter is, though, that drones have been making a name for themselves in recent years. So, these less expensive alternatives could continue to fill the role of news helicopters.

A TV news station that still benefits from this method of transportation can use a helicopter 3D card to show appreciation to the members of the team. It can come after a job well done in capturing a breaking story. In this model made for KQCA, a station in California, blue graphics are used to show off the Sacramento skyline. These deep shades parallel the nighttime image on the cover. With the helicopter coming out of the clouds above the skyline at an angle, the piece is incredibly dynamic.

Any time someone receives a card from you, you want them to feel a positive emotional connection. With custom 3D pop up cards that represent something that is both meaningful to you and them, you are certain to be received with delight. Let Awesome 3D Cards bring your favorite method of transportation to life in a new way. Contact our team to kick off the design process today.