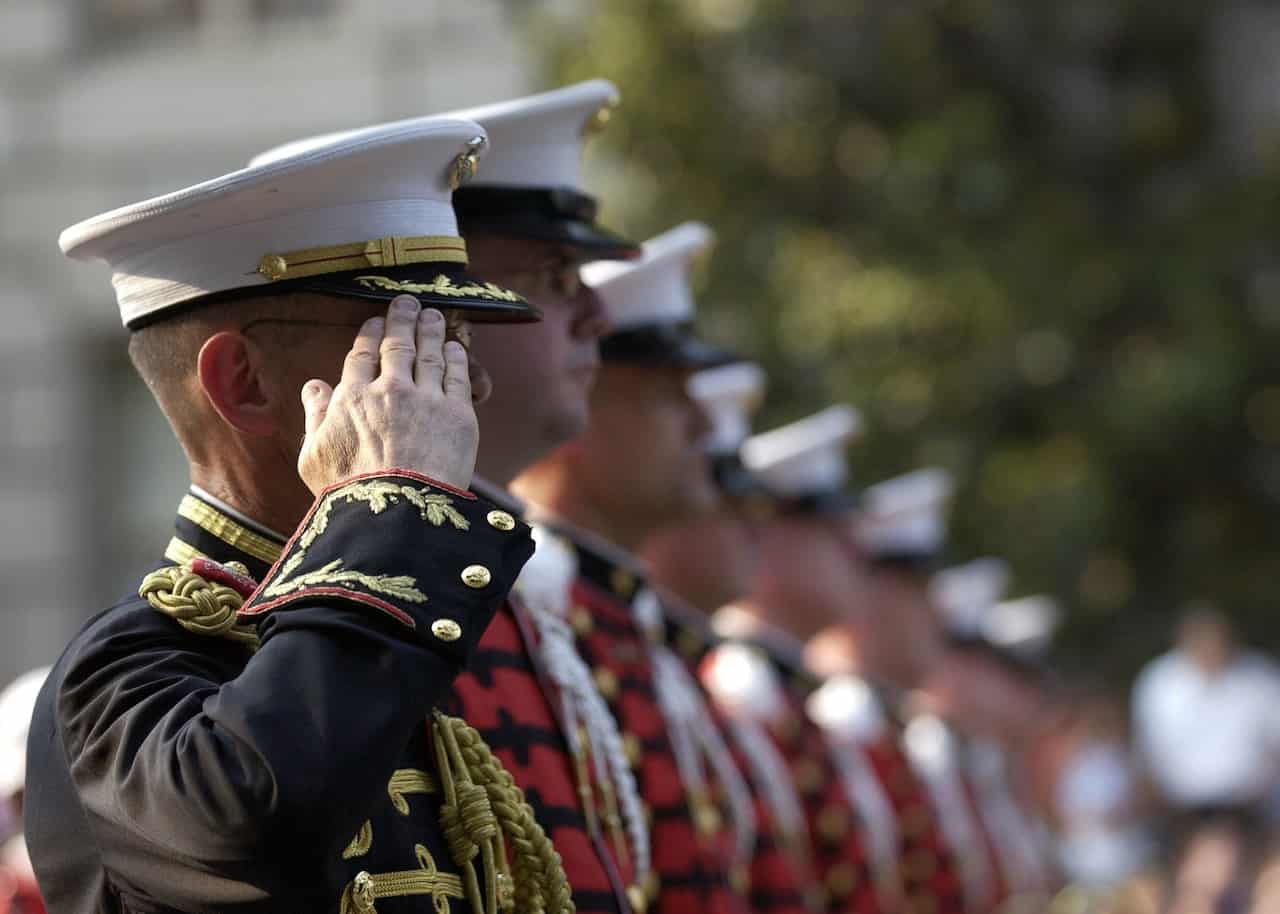 Photo by Pixabay on Pexels

According to the U.S. Census Bureau, the United States is home to approximately 19 million veterans. Many of these individuals started serving our country at just 18 years old. Regardless of how long someone has been in the service, they deserve our thanks for keeping us safe. But keep in mind that when you thank a veteran, it isn’t just that you are sharing gratitude for your personal safety. It is also being appreciative of their commitment and the time that they have had to spend away from their own families. Because we know that cannot be easy.

Customer appreciation cards are a great option to share with our service men and women. They give you the space to honor them on a tangible product. Cards are something that they will be able to hold on to for many years to come. Let’s consider how your business can meaningfully engage with our nation’s heroes.

Celebrate Veterans within Your Community

Observed annually on November 11th, Veterans Day is a federal holiday established to honor the United States Armed Forces. It is your chance as a business to acknowledge the sacrifices that have been made. And you can do so in greater ways than a quick post on your social media. Here are three opportunities to build relationships with members of the military.

Acknowledge the Veterans that You Know

It might be the case that you have a relative who served or is currently serving. You may even work with some veterans at your job. Make the time to celebrate with them in simple but meaningful ways. This could be by taking them out to lunch or to get coffee. Consider hosting a company-wide barbeque for the occasion.

There are thousands of registered charities in our country that benefit veterans and their families. You will find many in Texas, in particular, ranging from the Military Warriors Support Foundation in San Antonio to Heroes Night Out in Cedar Park. Find an organization that especially resonates with you and make a donation. Support those who have been wounded or affected by their service.

Your business should invest in customer appreciation cards. They have the ability to make anyone’s day, regardless of their age and background. Compile a list of names and addresses of those who you know have served so that you can send them personalized thank-you cards. Your business can make this a tradition. It isn’t a task that takes very long to complete, but it could truly make a veteran’s day.

When sending handwritten messages to military members, don’t use just any old cards. Custom 3D pop up cards are a fun and memorable way to reach them. They are something that recipients will be happy to keep around for a long time. Check out five customer appreciation cards created by Awesome 3D Cards that work perfectly for veterans. 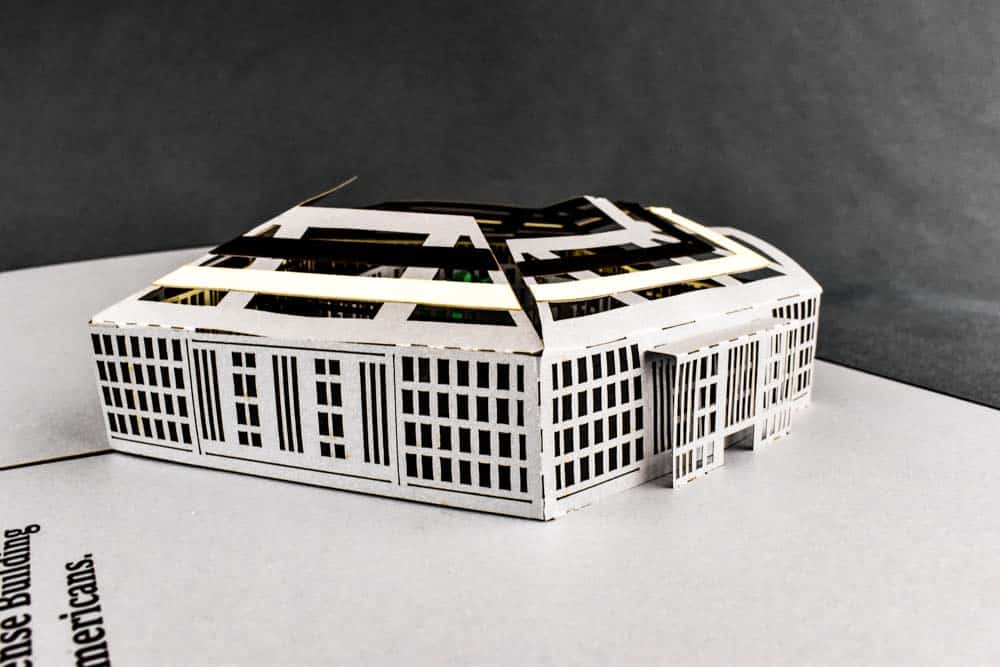 3D Replica of The Pentagon

As the headquarters building of the United States Department of Defense, the Pentagon is a symbol of our country’s military. It is the world’s largest office building, with several thousands of military and civilian employees. The Pentagon is featured in one of our Ready-2-Go models that can be purchased for immediate delivery. It is a realistic 3D replica of the building in all black and white. The interior of this customer appreciation card also emphasizes that the Pentagon is the nation’s number one defense building, protecting all Americans. 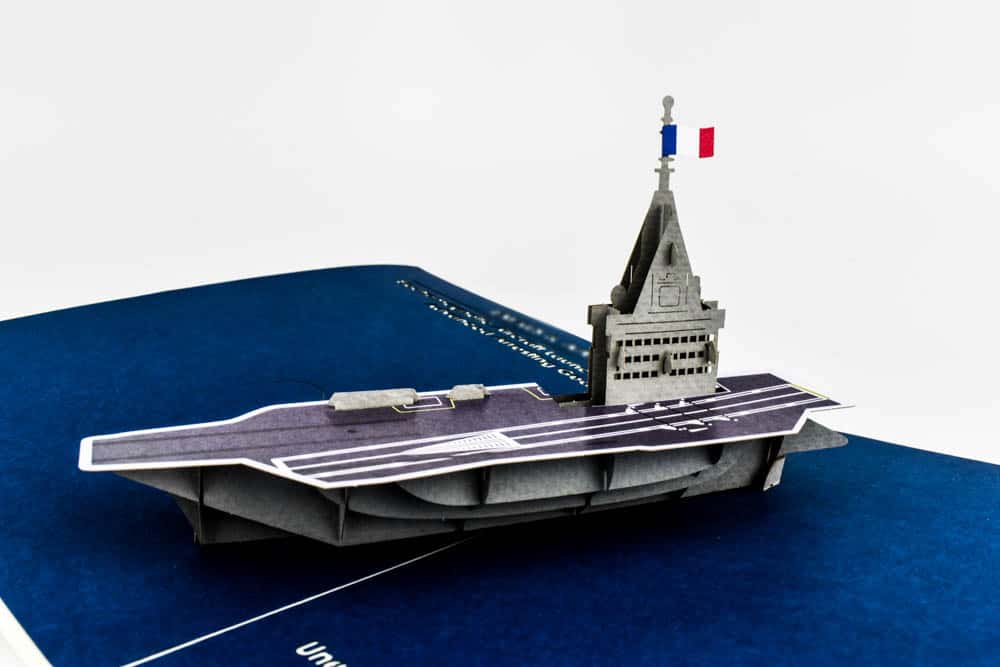 The French Navy has come up with an updated design for their aircraft carriers, known as PANG. This stands for “porte-avions de nouvelle génération,” which translates to “new generation aircraft carrier.” Awesome 3D Cards helped to design a 3D pop up card centered on the PANG for a large defense industry technology company. The cover shows an illustration of the aircraft carrier with a white cream background. When the recipients at a special event received this card, they were pleasantly surprised to find a 3D version of the PANG, complete with a French flag, on the inside. 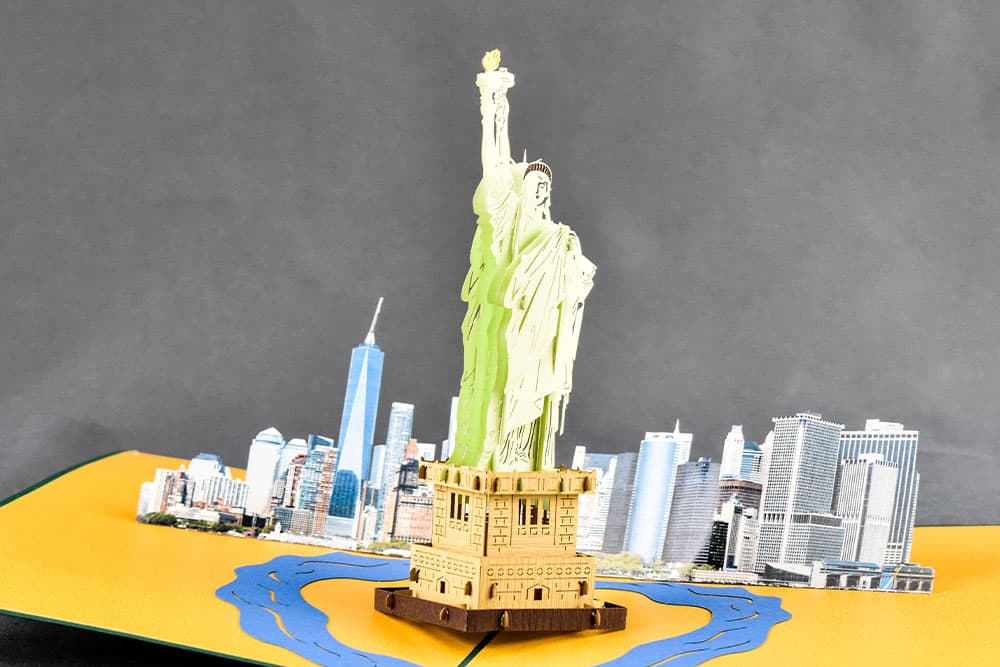 Pop Up Statue of Liberty Card

One of the most iconic symbols of the United States is the Statue of Liberty in New York City. It had stood for our freedom since it arrived in the United States in 1885. Another Ready-2-Go mode, our Statue of Liberty customer appreciation card is a great way to highlight the freedoms that our veterans provide us with. You can see Lady Liberty standing proudly with the backdrop of the New York skyline. With the fine details and multitude of colors, this is a visually stunning piece that any of our nation’s heroes will be excited to receive. 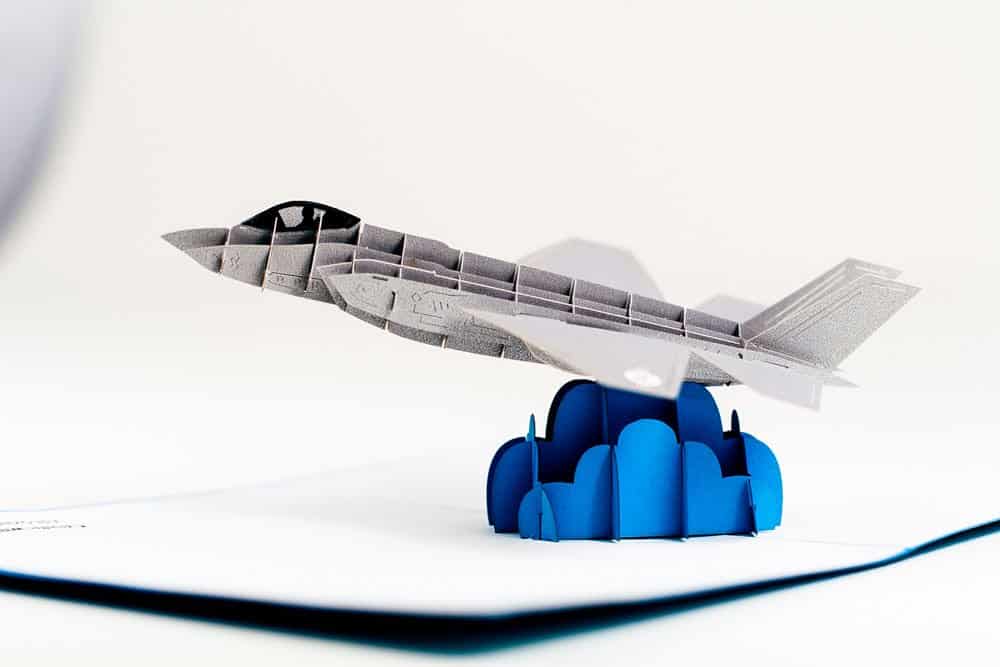 Are you sending a customer appreciation card to members of the Air Force? Consider making your 3D pop up an F35 Air Force jet. When Cadence, a leading Intelligent System Design provider, teamed up with Awesome 3D Cards, they used this image to impress aerospace and military industries. The pop up version of the F35 Air Force jet can be seen flying above the puffy blue clouds, adding a layer of dimension to this already-dynamic micro-experience. To pair with this, Cadence opted to include how they are a trusted partner to their clients. 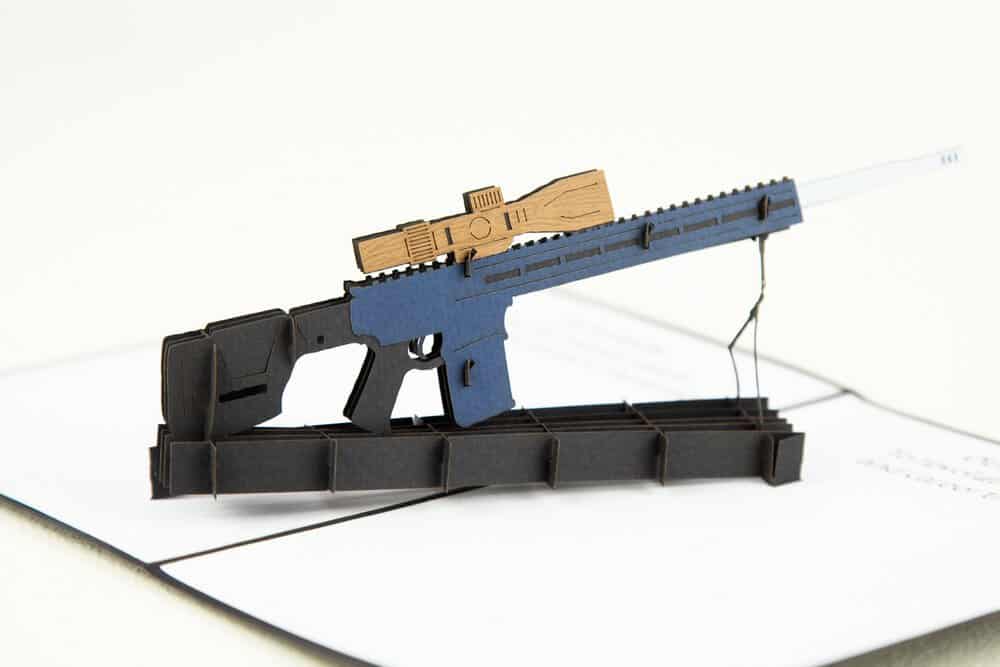 You can send 3D cards no matter what kind of organization you are part of. For instance, YourSix is a complete hiring solution that aims to help businesses obtain the best employees. Specifically, they focus on assisting veterans with finding work. Their 3D pop up cards to thank donors of the cause came in the form of a sniper rifle. This is a highly accurate, four-color model of the sniper rifle used in the Army by the founder of the company. Not only is the image deeply personal to the YourSix founder, but it also resonates with the card’s military recipients.

The goal behind every Awesome 3D Card is to bring a smile to a recipient’s face. This is done through the use of artistic micro-experiences. When a 3D card is opened, recipients are delighted, impressed, and surprised to see a meaningful pop up image. There are many ways that you can go about this for members of our military. But at the heart of every card should be a sense of connection and gratitude. Send us a message if you are interested in designing your own unique customer appreciation cards.