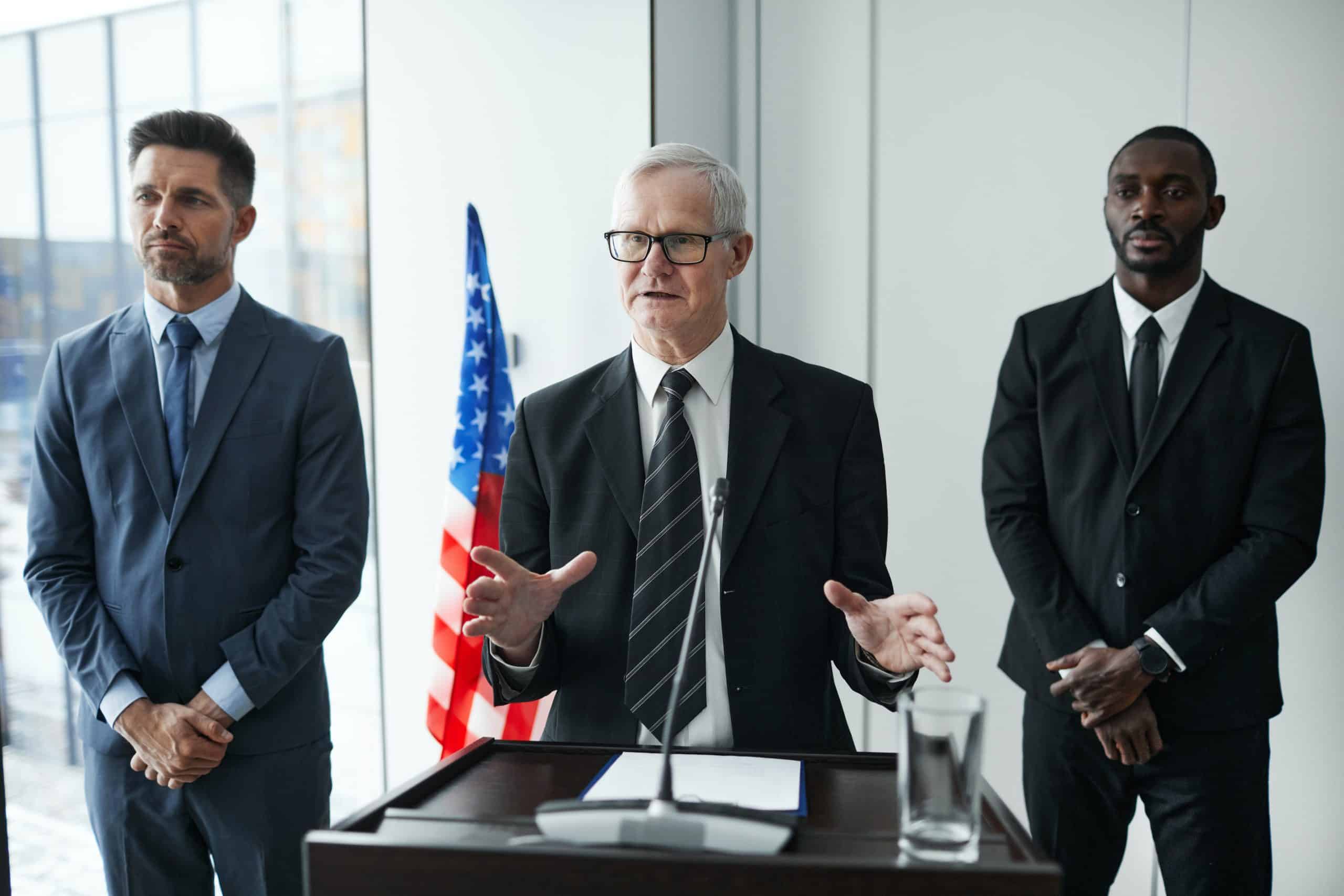 Photo by Werner Pfennig on Pexels

As a representative of the community, government officials face the everyday challenge of binding their local area, or even the entire nation, together. There may be a lot of stress associated with a non-profit governing organization’s responsibilities. If they decide that they would like to run again in the future, they must retain their voters’ loyalty. Although it may not be possible to have a perfect relationship with each and every citizen, there are ways to build strong relationships.

Politicians can promote their messages in the way that a business would. That includes branding their candidacy and being considerate of the audience every step of the way. Broadcasting a message effectively by using several different outlets can be effective. One of these outlets can—and should—be direct mail. Learn how introducing a visually interesting mailpiece, like 3D pop up cards, into a campaigning strategy wins over the hearts of the public.

Build a Foundation of Trust

There are four trust signals that representatives should be mindful of when launching a government campaign. The first is humanity. After all, the community wants to believe that their officials are kind and fair. Each time they step up to the stand for a speech, they need to showcase their empathy. Next, they need to be transparent. Regardless of what a candidate’s motives and background are, no one wants to vote for a candidate that appears to be hiding something. The third trust signal is capability. If they have already given back to the community, or are in their re-election phase, they should highlight what their accomplishments have consisted of. And, finally, there is an official’s sense of reliability. Can the public truly depend on them to fulfill their needs?

You might be surprised to learn that personalized pop up cards are an effective way to meet any audience’s expectations. Businesses utilize them for the sake of marketing and advertising. They are able to send them to both their customers and employees to emphasize their company culture. Government officials can provide 3D pop up cards to their supporters. In them, they can leave a unique message about how they are grateful for the energy that the supporter is putting back into their campaign or project. They can make a statement about what they are promising them. Then, they need to follow up on that promise.

The modern-day political climate is much different than it was years ago. Of course, this is because there is a new age of voters. But what hasn’t changed is the fact that relatable figures achieve greater popularity. An audience made up of the local community tends to blur the lines between an official’s personal and public life. The reason for this is because they feel that candidates will better represent them if they are proven to fulfill the four trust signals in both regards. Government isn’t actually a faceless entity. It’s a collection of capable public servants. Yet, oftentimes, when the public persona becomes so much greater than the personal, the community forgets that. Making a campaign or project as personalized as possible will serve an official well when they are under a watchful eye.

In order to be more relatable, those officials need to get creative. To do this, they can team up with Awesome 3D Cards for their promotions! Through the use of 3D pop up cards, which can either be sent in the mail or personally handed off, reps display their relatability. When opened, they bring a community member back to their childhood. Anyone is able to customize a card to perfectly fit their brand. 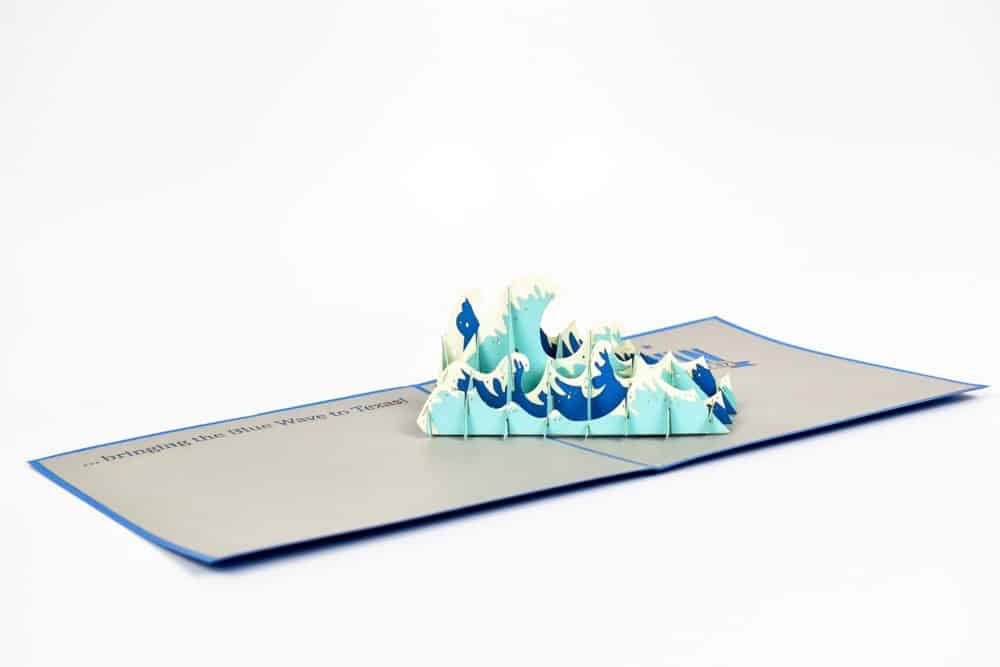 Engage with the Community

Viewing community engagement as just another box to check off is not the way government officials should go about it. After all, it can make a huge impact on any initiative. If they want to build momentum for their campaign or project, they need to take some time with the community. This will actually help them in being able to address all of the issues that a local area is facing. It may be things that they weren’t even aware of.

Candidates for political office need to be able to raise money. Otherwise, funding a campaign is a real challenge. They should start with planning an event for their community engagement strategy. Reps can announce it in a special way with 3D pop up cards. One design that they may go with for their card is a 3D ocean wave. With layered blue papers that are seemingly in motion, it offers an eye-catching experience that will encourage fundraising. This model may represent the wave of change that the official plans on bringing about to their city or state.

As government officials accept donations for their efforts, they have to make sure that they are following political fundraiser regulations. Brushing up on the Texas Ethics Commission’s guide before hosting an event is a good idea. Still, though, donors are the ones who are backing that rep’s efforts as a public servant. The candidate needs to keep their donors happy so that they continue to support them. A big part of fostering stronger relationships with them is going to be recognition. It isn’t enough to just outright tell them “thank you.” However, saying it within 48 hours makes them four times more likely to give to a campaign or project again.

Representatives shouldn’t let too much time go by after someone openly supports them. Each supporter matters. That means that every show of appreciation matters. It’s the best way to encourage future involvement. With 3D pop up cards, a thank-you message will be timely, authentic, and impactful. This won’t just be necessary following a donation. No matter what your background is, when you use a 3D pop up card, you must take care to frequently share your gratitude with your supporters. 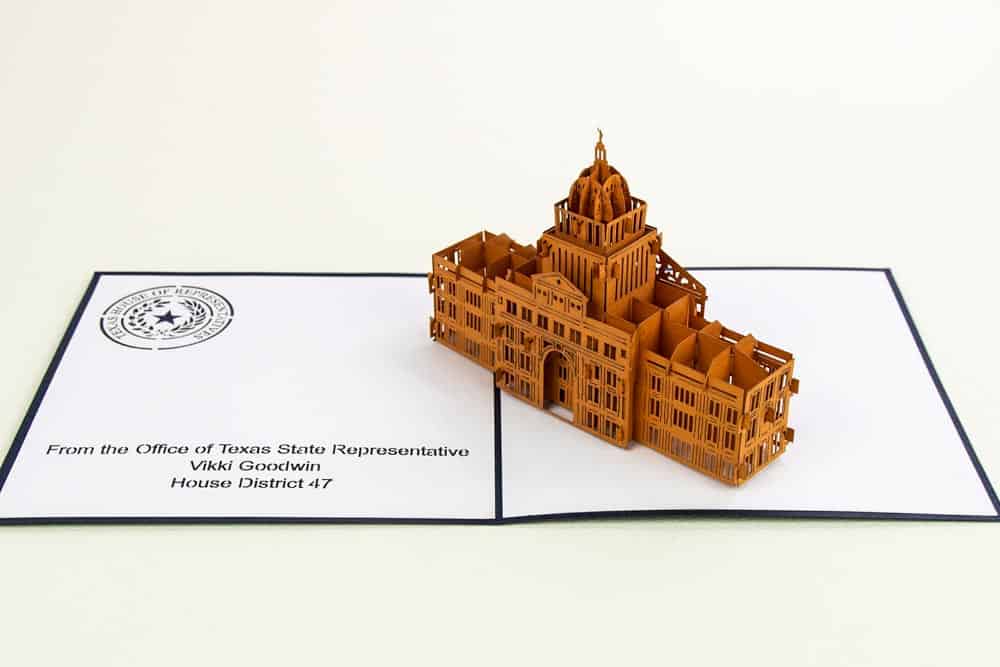 Show Off the State Capitol

3D pop up cards should highlight something meaningful. And what is more meaningful than a state Capitol building? These act as the focal points of a government. It is one of the most recognized symbols of democracy in the United States. Public servants who are running for office are able to use this imagery to emphasize their care for their respective cities or states.

Texas State Representative Vikki Goodwin decided to go the route of 3D pop up cards for her re-election campaign. She wanted a more personalized way to thank her donors for supporting her. The design that she went with was, of course, the Texas State Capitol. In her customized card, she opted to make the building burnt orange. This was to represent The University of Texas at Austin—the oldest university in the University of Texas System, which is mere miles from the Capitol. Alongside the pop up is the seal of the Texas House of Representatives, as well as Goodwin’s name and district. There is no question about who this is from, helping her to stay top-of-mind with her stakeholders.

At Awesome 3D Cards, we are an Austin-based business that specializes in the Vietnamese art of kirigami. We chose this form because it offers a dynamic micro-experience that anyone can enjoy. By incorporating kirigami into corporate cards, community representatives can make recipients even more excited about what they are bringing to the table. Stakeholders should know that officials value them. There is no better way to do that than with a handmade 3D pop up card. Regardless of the age, gender, or job position of the recipient, they will be delighted to hold a piece of that candidate’s appreciation in their hands. You can reach out to our team to explore our card-making capabilities.