Architecture has a very real impact on our emotions. We are left in awe of creations that made something so visually interesting out of everyday materials. This is true whether it’s glass or stone or wood. Those materials are celebrated and brought out in the most expressive way. Essentially, architects are shaping the world around us. And what better way to indicate to your supporters that your organization is going to play a major role in shaping their world than an architecture-themed 3D popup card? In fact, one of our superpowers at Awesome 3D Cards is creating brilliant 3D models of structures. Check out these five architectural designs that you can incorporate into your customer appreciation cards. 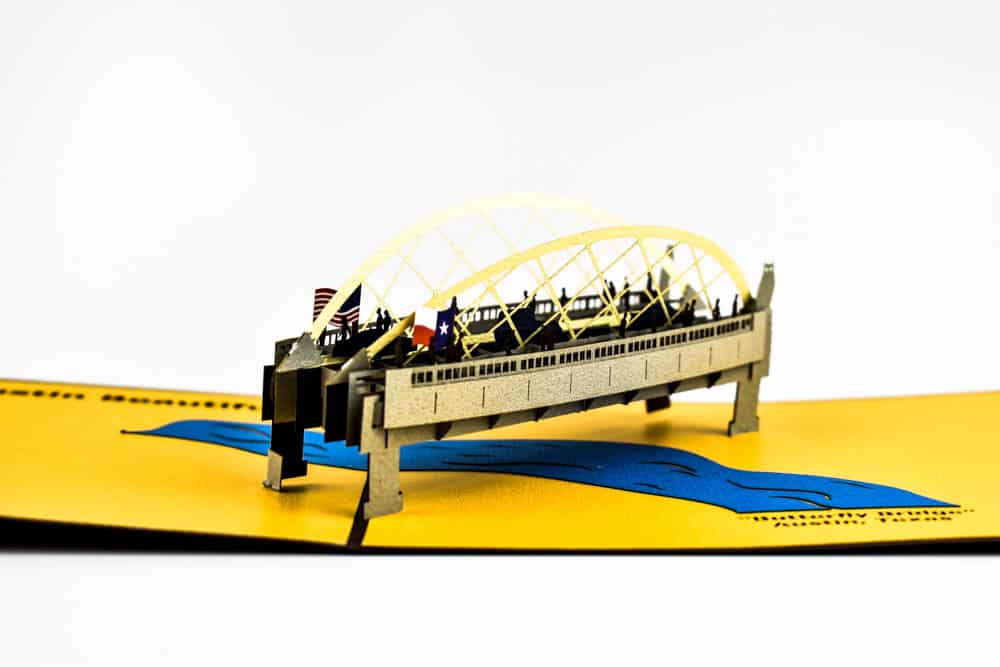 There are three goals behind the creation of bridges. This is to get travelers across safely, to offer efficient movement, and to be economical. For generations, though, bridge designers have been concerned with aesthetics. It is agreed upon that bridges must be simultaneously robust and elegant. Bridges should fit well within their environment. If that is the case, then that structure will be able to contribute to the improvement of the city’s appearance.

Austin, Texas is home to some very notable bridges. There is the 360 Pennybacker Bridge, the Congress Avenue Bridge, and the Pfluger Pedestrian Bridge, just to name a few. These have turned into great photo ops for people who visit Austin. One bridge that is on the newer side is the Butterfly Bridge. Although the project began in 2006, it wasn’t completed until 2015. The Butterfly Bridge is known for its arches being canted like a butterfly. Its late-night colorful lights illuminate those arches and the cables.

Represent your local business with a 3D card from Austin. A Butterfly Bridge popup may be just what you need to get customers excited about what you have to offer, and this design is already in stock and ready-to-go. In this customer appreciation card, there are a lot of fine details. The cover showcases a photograph of the bridge, while the interior brings it to life in a new way. Look closely at the model, and you can see the American and Texas flags to amplify the sense of loyalty to the area, as well as the shadows of people walking by. If your customers have walked on this bridge before, it will take them back to that experience.

Located in northern India, the Taj Mahal is one of the Seven Wonders of the World. The Seven Wonders is a list of incredible architecture that was updated in—you might be surprised to learn—2007. The previous list had been made in the second century BCE, so it was due for some modernizing. Not only is the Taj Mahal recognized as one of these Seven Wonders, but it is also a UNESCO World Heritage Site. To get on this list, your architectural structure must bring outstanding universal value. Considering the Taj Mahal has been dubbed the jewel of Muslim art in India, it certainly fits this expectation.

The Taj Mahal is made up of white marble, featuring formalized floral and geometric patterns. A hierarchical use of the marble and red sandstone has symbolic social structure significance for the Mughal empire. At the time of the Taj Mahal’s creation, this type of architecture was at its peak. It features two mosque buildings that are placed on either side of the mausoleum.

Whether you run a company in India or have brought your Indian culture to business in America, a Taj Mahal 3D popup card may speak to you and your customers. In this card, the mausoleum is proudly showcased as a one-color model. Although it appears simple, the piece is actually quite detailed. The cuts in the paper are very precise, even down to the doorway. Set against the metallic gold of the background, the 3D Taj Mahal is a reflection of how spectacular the building truly is. Use this design as your customer appreciation card upon making a sale or attending a special religious event. 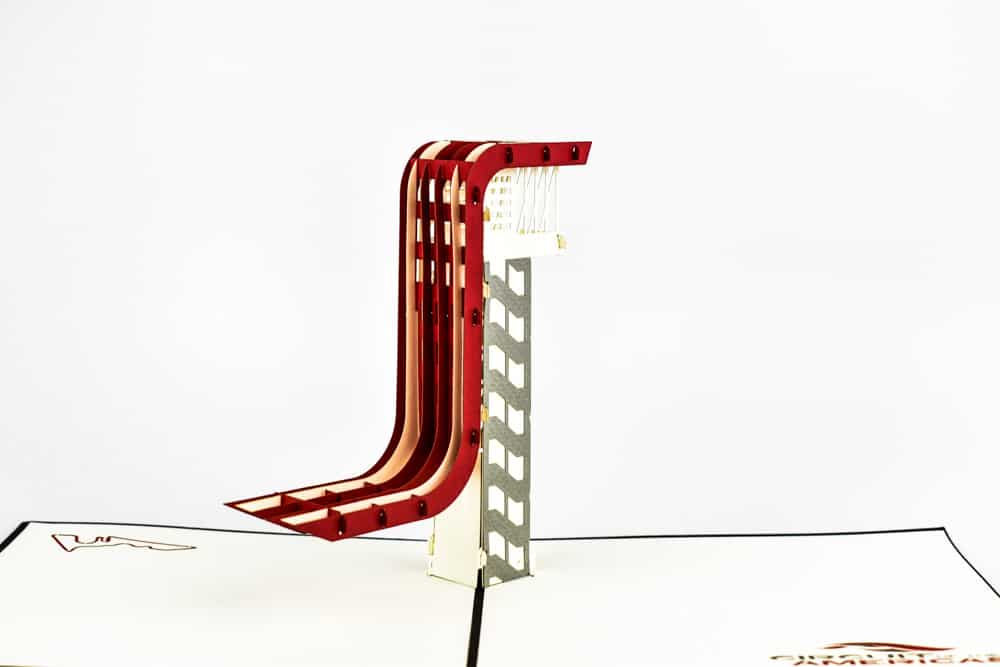 The Circuit of the Americas (COTA) is the premier destination for racing. You can attend events for racing cars or motorcycles. The track that they use is 3.426 miles in length and features 20 turns. It was the first in the United States to be specifically built for Formula One.  Racers from around the world have been coming to Austin for the past decade to take on the Grand Prix circuit. But that isn’t the only thing that happens here. COTA also hosts many other entertainment gigs, such as concerts.

Already, the Germanian Insurance Amphitheater is a spectacle because it is the largest outdoor amphitheater in Central Texas. However, the Observation Tower is arguably even more iconic. Coming in at 251-feet high, this tower is a major landmark of COTA. The design of this incredible architectural addition was inspired by the movement of sports cars. On top of it providing a 360-degree view of the circuit, you can see all of downtown Austin.

A 3D representation of the Observation Tower was used as thank-you cards for investors, partners, and suppliers. It offered an impressive way to engage with COTA stakeholders. Much like how the Tower is located in the middle of the race course, it is located in the middle of this customer appreciation card. It stands as tall and proud as it does in real life. This 3D card features the COTA logo simply on the front in black and white. It needs no formal introduction. Once a recipient opens the card, it will be clear where it is from. 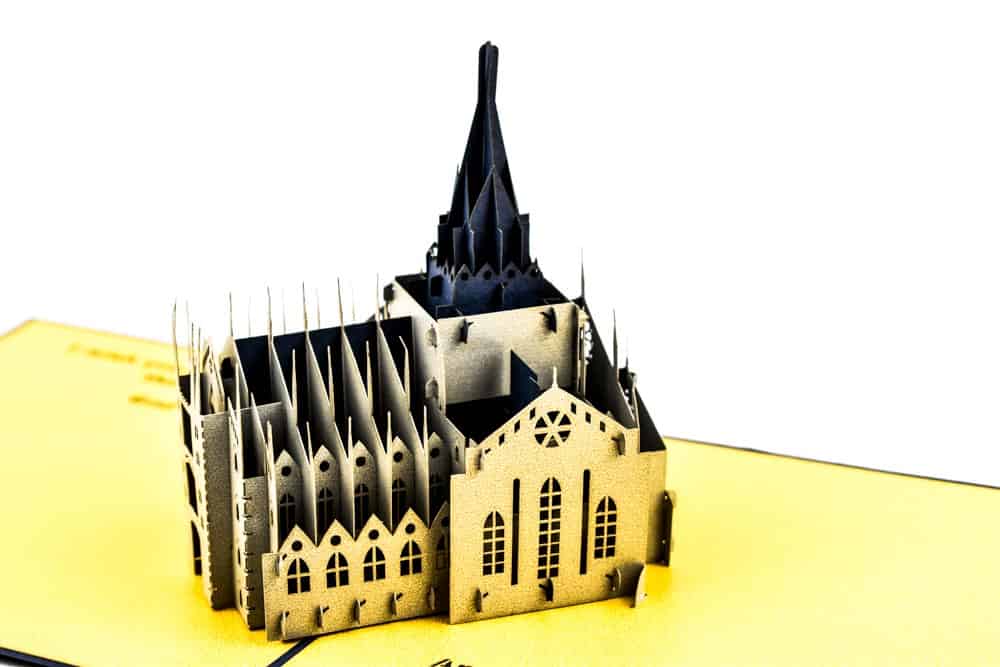 Rose windows are another stunning addition to Gothic architecture. They are large and circular, and are a strong example of the importance of natural light during this time. By using stained-glass window panels, the interior would be full of preserved light, contrasting with the outside darkness of the cathedrals. The aim was to have a brighter room that, in turn, brightened the minds of the congregation.

Are you in need of customer appreciation cards for the holidays? A Gothic cathedral popup design is a beautiful and different way to depict that special occasion. This is another 3D card that utilizes metallic gold paper on the inside. However, you are welcome to pick any color that you want. Just make sure that it plays well with the darkness of typical Gothic architecture for the sake of consistency. Note, too, that this piece includes 40 windows and 43 small spires. There is a lot that is packed into such a small space, thanks to the power of laser cutting. This is an elegant choice for any time of year, including holiday cards for business connections. 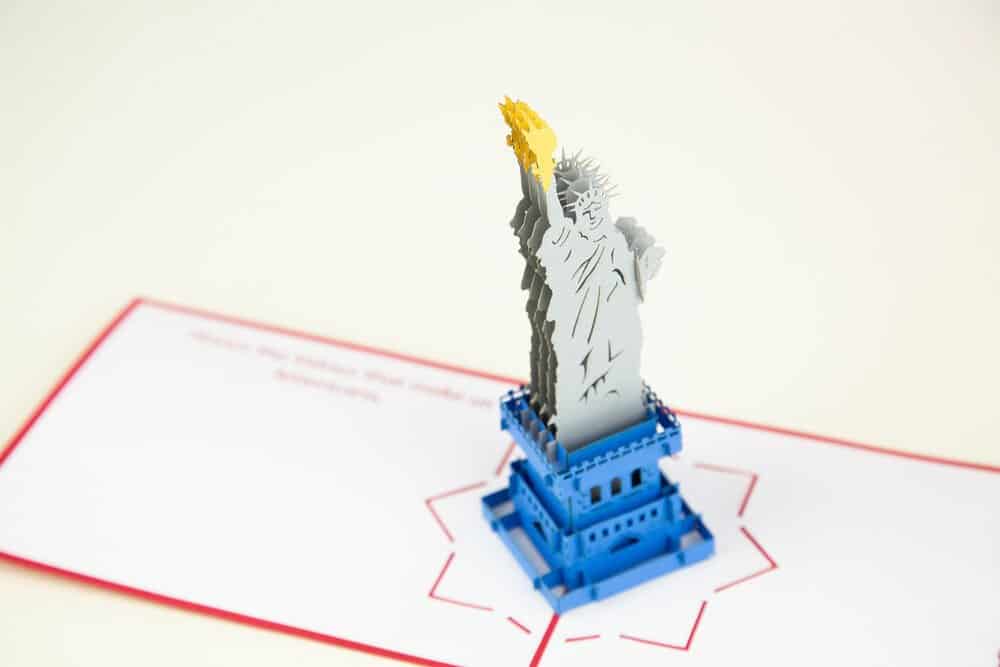 Think about symbols of the United States. What comes to mind might be the flag, an eagle, or the Statue of Liberty. Long after its arrival overseas, the Statue of Liberty continues to stand for our country. It was first conceptualized in 1865 by intellectual and activist Edouard de Labolaye. Frédéric Auguste Bartholdi was taken by the concept of such a symbolic monument that he went on to design it. About a decade later, fundraising efforts took off to see the project through.

What makes the Statue of Liberty so interesting beyond how it came to be and how it landed in New York City, it was designed with neoclassical style in mind. Specifically, it was inspired by Libertas, the Roman goddess of freedom. Bartholdi planned out a female figure in robes with a legal tablet that boasted July 4th, 1776—the date of the American Declaration of Independence.

Share the feeling of freedom with your customers. By using a Statue of Liberty model in your luxury-sized customer appreciation cards, you are sure to impress them. This layered design is a gorgeous interpretation of the monument. Lady Liberty rests on a bright blue pedestal, holding her signature torch to light the way. You don’t have to just have a New York business to use this card in your business strategy. Considering every American knows the value of the Statue of Liberty, any American company can promote its mission through this symbol of enlightenment.

Do you have a building in mind that means something to your business? It doesn’t have to be something that everyone across the country knows. In fact, it can be something that only your local customers know exists. No matter the case, Awesome 3D Cards is more than capable of bringing your building of choice to life in the form of a customer appreciation card. Contact us to talk about what your inspiration is and what you expect out of a 3D popup card.